Snowy garden on March 21st! Wasn’t I meant to be planting peas? 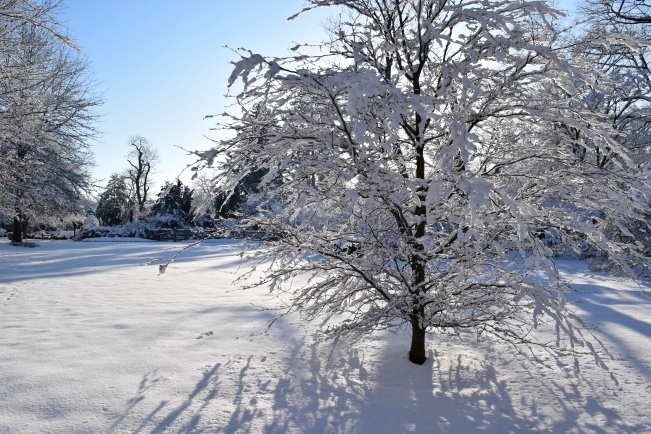 Late season snowstorm is beautiful but enough is enough-

Today is the first day of spring but you would not know it as we had a late season storm yesterday that brought another few inches of snow. It was beautiful outside today with morning temperatures hovering around 32 degrees fahrenheit and the snow crisp and crusty on the surface. The sun came up and brought some of its spring power to warming the air. A few hours later the temperatures rose to the 40’s but with plenty of snow left to melt.

The gate to the vegetable garden is still blocked by snow but I am thinking ahead to planting peas and sweet peas. Vegetable planting seems a distant dream today, but as we say to each other to keep our spirits up, ‘it can’t last now’.

Scarlet Rosemallow - Hibiscus coccineus - is native to SE USA. Found in damp soils it is eye catching with its bright red star-shaped flowers. Attracts hummingbirds and butterflies. Can reach 6 foot or more tall
Four views at Morris Arboretum of one of the fountains, view from the Orange Balustrade, the Pe mock Flower Garden, and the view up the hill back to the fountain, and balustrade. Sunny and not too hot today as there was a light breeze.
Second set of views of Chanticleer Garden today - overcast skies with rain later but nonetheless a fabulous day to walk around and take in the sights and smells of the garden - from the elevated walkway to the willows, the lotus and pond, gravel garden and meadow - no filter necessary
Seven views of Chanticleer public garden - just outside Philadelphia - more on next post. This enchanting garden is part of the group of over 30 gardens that make up America’s garden capital. Come and visit as soon as we can travel again. In the mean time enjoy the photos
Beautiful day in the meadow at Longwood Gardens - buzzing and humming with pollinators and birds looking for seeds and insects. Colors that predominated - yellows - Silphium, goldenrods and others, soft greens, and pale purple-pink of Joe-Pye weed
A couple of views across Lake Galena in Peace Velley Park - no filter. Lovely evening for a stroll. Quite hot but a nice breeze
This little Skipper Moth was having a feast on the Tithonia this afternoon. Flying from flower to flower as it busily pollinated
It is fungus season at Northview. So many fascinating species. Two views of one under a spruce tree. Expect more pictures! I have loved fungi since childhood when we would roam the Kentish countryside on Fungal Foray’s with my botanist father and his academic advisor who was one of the top mycologists in England. What fun memories. See what fungi you can find
Goodnight half moon over the sunflower weathervane. Timeless feeling as darkness fell
Four views of the evening walk around the garden. Beautiful pink sky with water reflections - peaceful. Wishing you some peaceful garden thoughts
No filter necessary for these brilliantly colored Zinnias. I love to surround myself with bright colors - they cheer me up. What are your favorite garden colors - hot pinks and oranges or cool greens and soft blues?
Lovely stripy bumblebee enjoying the zinnia flower. Zinnias are attractive to a wide range of pollinating insects
Two views of this Blue-winged wasp feeding on nectar, pollinating the flower and later on hopefully destroying some Japanese beetle grubs What pollinators are you seeing on your flowers?
Rob Cardillo came to take some photos in the garden today. I can’t wait to see what he saw through his lens. I love it when people show me their photos of my garden as everyone notices something different
Evening light in the garden. View along the garden path to the shed - the hub of garden operations - tools, notes, a place to sit and think. Where do you sit in your garden?
Bottle Gentian never really opens fully and is pollinated by large bumblebees that are able to push inside to get the nectar and pollinate the flower. Grow in part shade in medium moisture. Native to North East USA
Gloriosa lily - Gloriosa superba - grows from a tuberous rhizome planted in our Zone 6-7 garden after the last frost. Beautiful form and bright colors
A quick raid on the garden gave me a vibrant jewel tone bunch of flowers to give to my daughter- zinnias, rudbeckia, tansy, agastache, verbena, and helenium
Loading Comments...
Comment
×
%d bloggers like this: