The Hamamelis season is in full swing here at Northview. Many of the witch hazel flowers are out earlier this year as the weather has been mild  this winter, although combined with one of the heaviest snowfalls recorded in Philadelphia. I have been thinking about witch hazels for the last few weeks. I was lecturing at the Holden Arboretum, near Cleveland, Ohio, and one of my fellow speakers was the well-known witch hazel nurseryman, Tim Brotzman. His nursery is located only about half an hour away from Holden Arboretum and he gave a very interesting talk about the difference between dormancy and hardiness. His words were heartfelt as they were illustrated by the devastating pictures of plant losses at his nursery due to sudden temperature changes that occurred when plants were not physiologically prepared to handle them. Tim has been involved for decades in the breeding, selection and growing of fabulous witch hazels (amongst other genera). He is knowledgeable and very willing to share information.

This weekend I had a lovely trip to New Jersey, also on the quest for witch hazels, to the Rare Find Nursery Hamamelis Festival with a witch hazel overview by horticulturist and educator Derron Dover. Of course I could not leave the nursery empty handed, so I have added a few more to my growing collection. The funkiest colored witch hazel that I bought is ‘Amethyst’ that came from a cross performed by Tim Brotzman and named by Don Shadow. It is thought to be a H. vernalis cross that has almost unreal purplish flowers. I will have to site it against a lighter background so that the purple color is visible in the landscape. I am currently thinking of putting it against my new shed that has walls of light green and a bright pink door. ‘Amethyst’ is meant to get about 9′ high by about 7′ wide so it is not one of the largest witch hazels. It may be a good choice for a smaller garden.

Other additions were H. mollis ‘Emily’ with yellow winter blooming flowers, again a smaller stature, and H. x intermedia ‘Konrad Dierks’ a much larger yellow-flowered witch hazel. Another interesting find, that is not yet in bloom is H. x intermedia ‘Orange Encore’ that has purple flushed leaves and good fall color. I always like to add several seasons of interest from a plant so we will see how it performs in the garden. 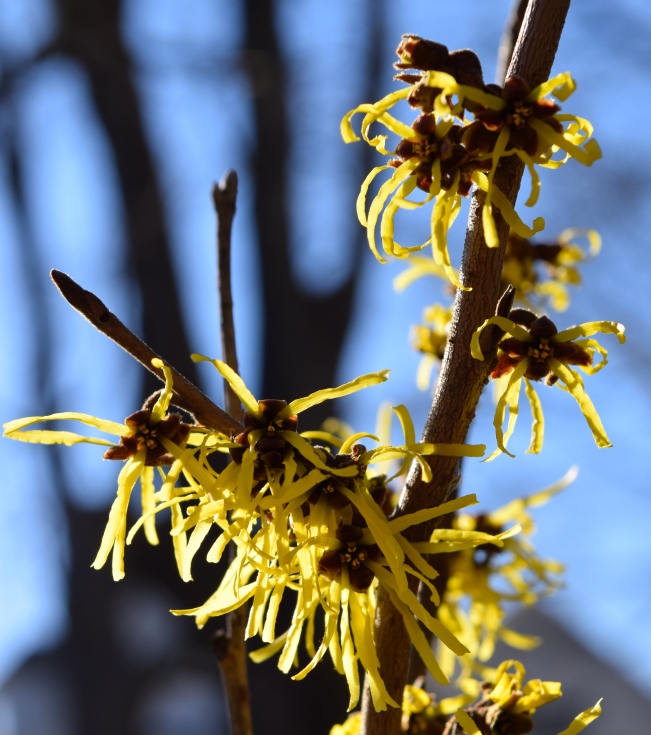 Finally I had a lovely day wandering the garden here at Northview, camera in hand. The sun really caught and intensified the deep yellow flowers of H. x intermedia ‘Barmstedt Gold’. At last this shrub is beginning to grow nicely and fill in the space in the garden. Note the two-parted seed capsules that remain on the stems (shown below in between the two clusters of flowers). It takes a few years for witch hazels to settle in, but what other garden shrub can give you winter blooms in so many different colors, that are fragrant and that are so rewarding for gardeners that have been kept out of their gardens by snow and ice?